The Valley Life Science Building (VLSB) was funded by a 1926 state bond that was actively campaigned for by UC Berkeley students and alumni, designed by architect George W. Kelham, and completed in 1930. The building is located in the center of the UC Berkeley campus (Figure 1). 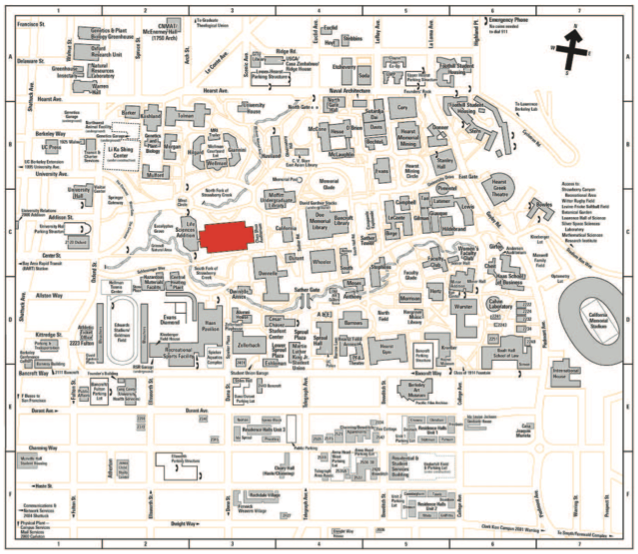 At the time of its completion, it was the largest building in the United States west of the Mississippi River and the largest academic building in the world. The building is mammoth in its proportions. The footprint of the building is approximately 250×500 feet; its figure eight racetrack of hallways extend for over a mile. The building has five floors, for a total of 408,500 gross SF1 of space, of which 269,500 SF is assignable space. VLSB was designed in a 'Neo-Babylonian' style; the four projecting pavilions at the corners of the building contain art deco elements such as friezes of garlanded ox skulls, griffins, and Egyptian-Babylonian priests (see Figure 2). 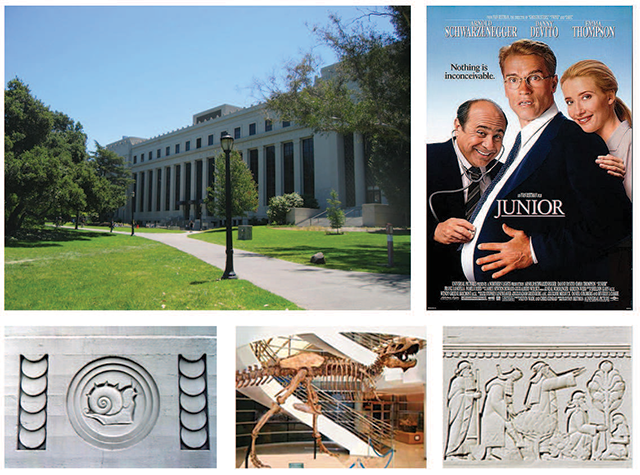 Figure 2: The Valley Life Science Building (VLSB). Top left, A photo of the north side of the building. Top right, The building’s fifteen minutes of fame were in 1993, during the filming of the Arnold Schwarzenegger film Junior in which Governor Schwarzenegger plays a scientist who becomes pregnant. The film received poor reviews. VLSB, however, proved to be a photogenic co-star. Bottom left & right, Details of the building’s exterior. Bottom center, The main public attraction in the building is the Tyrannosaurus rex skeleton which is on display in front of the Museum of Paleontology.

About sixty years after it was built, VLSB was renovated to modernize the laboratories and allow the consolidation of several departments (such as the old Paleontology, Botany, and Zoology departments) into the new Department of Integrative Biology. The renovation was completed by The Ratcliff Architects, a San Francisco bay area firm, at a cost of about $100 million (over fifty times the original cost of $1.8 million in 1930). The renovation completely gutted the building, rebuilding and increasing the available space by filling most of the interior courtyard area of the original design with new laboratories and classrooms.

VLSB holds some fifty research laboratories, three large auditoriums (one with a capacity of 429 students), six classrooms, undergraduate teaching laboratories, the Marian Koshland Bioscience & Natural Resources Library (with over 450,000 volumes), and five museums (the University and Jepsen Herbaria, the Museum of Vertebrate Zoology, the Museum of Paleontology, the Essig Museum of Entomology, and the Human Evolution Research Center). The teaching areas, library, and museums occupy approximately three of the five floors; for the most part, the top two floors of the building contain research laboratories. VLSB is occupied to its capacity.

This article is an excerpt from a grant proposal titled "Building a Center for Theoretical Evolutionary Genomics" by Integrative Biology Professor and Chair John Huelsenbeck.